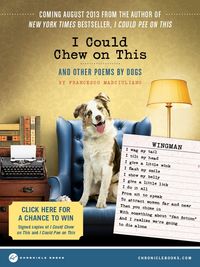 For Christmas I received this book of poems, I Could Chew on This and Other Poems by Dogs from my friend Julie. I assuming the book would be a silly parody of nonsensical dog poems. However, Francesco Marciuliano shows he has a mastery of that very meter of poetry that works to elicit a laugh. Call it doggerel (I couldn't resist), call them limericks, whatever...it takes skill. As some say about poetry, it can't be taught. As even more say about being funny, it really can't be taught.

All successful jokes and funny stories involve "comedic timing," which is another way of saying a finely tuned sense of the meter of the language. Bad jokes usually choke for lack of such timing.

I loved these very funny dog poems. If you prefer cat poems you might read instead his poems found in the book I Could Pee on This. 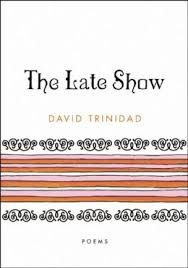 But also because I just started reading Frank O'Hara's collected poems and biography and Trinidad is reminding me of O'Hara in style (and not just because he's also a gay, pop-culture loving poet).

And also because the book has a crown of sonnets and I love those (ever since Joan Larkin turned me on to them and the ones called  "the blackout sonnets" in her own book A Long Sound). And also because the poems are varied, some simple and short, some complicated and long. The lipstick-color collage is amazing. The movie-title poems are amazing, too. The book also deals with memory and childhood, toys, and the meanness of the poetry world. You get name-brand toy dropping and name-dropping of the regular ole literary kind.