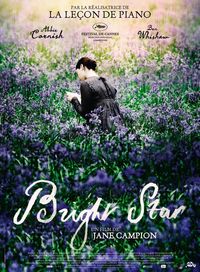 Bright Star (2009) is another BBC Films movie focusing on the 1818 love story between John Keats, (played like a heartthrob by Ben Whishaw), and Fannie Brawne, (played by Abbie Cornish), with screenplay and direction by Jane Campion.

This was another winner with great depictions of the following:

- the pompous, insufferable poet who has no sense of humor about himself or anything else, played by Paul Schneider as Keats’ friend Mr. Brown

- sequestering yourself to get writing done

- choosing a life of poetry even though this entails poverty

Just as she did in The Piano, director Campion makes another unhurried, particular movie. She is a master of shooting the outdoors, the outside lawns and forests of Hampstead Village, full of butterflies and the sounds of the woods. Campion is also good at including adorable little girls in her pictures, girls who run around the heath and steal the movie.

Here, Campion sets up a parallel of craft between Brawne’s labors over stitching and sewing her fashions and the labor of Keats' writing. There is a scene midway that is a remarkable bit of visual poetry itself: Brawne laying in her bed in the first thoes of love as her window curtain floats across the room toward her.

Campion also does a few studies in the ruffles of “almost-silence” (with interesting foley sound effects) and visually in a look at love’s madness (with a succession of butterfly scenes that begin with beauty and end in depression—hey, we’ve all been there).

Brawne suffers trying to relate to Keats, declaring, “poems are a strain to work out” before she asks Keats to teach her how to read a poem. Keats describes reading poetry to her as similar to swimming in a lake. The point is not to rush over to the other side but to enjoy floating in the middle of it.

Many of Keats' most famous poems are recited. You also get to feel the exhilarating joy and tactility of receiving hand-written letters.

But warning: this movie is not for those with a “delicate constitution” as the film requires a steady crying jag that lasts practically the full final half. 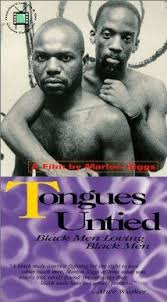 Tongues Untied is one of the documentaries listed in the documentary about 50 documentaries you should see before you die. The movie is both a collage of experiment and a personal statement by Marlon Riggs about his experiences as a black gay man. Between narratives, the movie weaves in spoken-word poetry, popular music and dance.

At the time of its release, the movie was labeled pornographic and used as an example in the attack against national funding for the arts. Looking back, that response looks shamefully puritan.

Posted at 04:07 PM in Poetry Technology, Whole Life of the Poet | Permalink