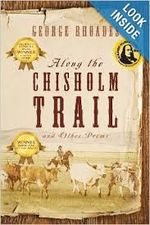 As sort of an anecdote for the hard, experimental poems in the American and Modern Poetry MOOC, I refreshed my palate with some genre forms. Along the Chisholm Trail by George Rhodes is an self-published book that has won quite a few indie awards last year. It's a big book of 131 pages, half of them are cowboy poetry based on the Chisholm Trail, half are miscellaneous poems about aging in modern times.

At first I expected this book to be somewhat reactionary as cowboy poetry can sometimes be. But Rhoades is a former journalist and teacher. His point of view was balanced and his poems on cowboy mythology somewhat grounded in reality. In some poems like "The Cowboy Way," he even questions modern ideas about cowboy self reliance.

I was particularly interested in his book because I'm working on my own set of cattle trail poems.  Rhodes uses a consistent ballad form that might not appeal to everyone but his rhymes were pleasant and interesting and his endings had force to them.  But strangely, the poems petered out a bit toward the end and the last poem, as a final poem, was a definite flatliner.

After the Hunt is the first book of poems I've read by poetry colleague Devin McGuire who I met last year while he was promoting an anthology from Encirle Publications.  His more slender book of 30 pages is full of 1970s and 80s references that hit right at my age. The book deals with the themes of struggle: struggle in surviving loved ones, struggle in relationships, stuggle in weather, the struggle of waste and wastedness.

My favorite poem was "How to Kill a Fish" and in fact I really gravitated to the poems that mentioned fishing or hunting (although I am not a fisherman or hunter) even briefly. Hopefully we will continue to see more fish and game poems in forthcoming collections.