A Book About Women in Language Poetry 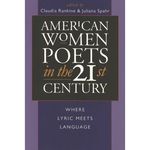 Recently finished  American Women Poets in the 21st Century: Where Lyric Meets Language edited by Rankine and Spahr. And although the title is meaningless and uncreative (typical language poetry like), the book was an interesting but difficult study of 10 female language poets and their relationship, sometime antagonistic or conflicted relationship, to lyric poetry. Each section includes sample poems by the poet, their artistic statement (such as they believe in that...some did more than others) and a long essay explicating their work and contributions to poetic thought. The poets included are:

The poets with asterisks are ones that were included in a recent MOOC (massive online open course) I participated in this fall, Modern & Contemporary American Poetry. I almost wish I had waited to read the book until after I had taken the course. I don't think I would have found it as slow-going. The MOOC discusses many of these topics but in a way more succinct and user-friendly way.

However, even without the class, my favorite sections were those on Jorie Graham who is more conflicted than dismissive of the lyric and Harryette Mullen who covers language poetry from a perspective of race and privileged literacies and whose poems felt the most young, modern and pop-culture inclusive.