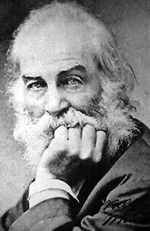 Did Walt Whitman think one day he's be the inspiration for so many tote bags? What would he make of it if he had known?

I re-subscribed to the Academy of American Poets (mostly for their journal) but since then, I've received three more letters from them (September 19, October 4 and October 11). One is asking me to renew (this must have gone out before I renewed online), one thanking me for renewing, and one offering me a "small commemorative Walt Whitman canvas tote" for an additional $35. I was highly interested in this tote and now have one. I went online today to see if I could find a picture of it (so I wouldn't have to take one) and I found a quite amazing bouty of Walt Whitman tote bags which have been created for some purpose or other.

I guess the idea of a tote bag and Walt Whitman go together like ramma lamma lamma, ka dinga da dinga dong. View the plethora of Walt Whitman totes out there in the world!

The Poetry Society also sent me a post card (Poetry, I too, write it.) letting me know that I can enter their annual contest for free because I'm a member. But I don't think I'm still a member. 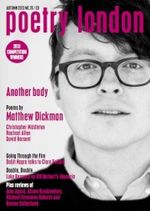 For my birthday I asked for a one-year subscription to Poetry London, four issues a year. My parents ended up getting me a two-year subscription (which was a bit pricey considering the trans-atlantic mailing costs). I haven't yet made up my mind about this journal. Maybe after 8 issues I will.

This Autumn issue to the left sat on our coffee table for two weeks while I was reading it. My husband, Monsieur Big Bang, kindly asked me to remove it a few days ago because he was tired of looking at that poet's bemused mug.

I really enjoy the international selection of writers (which is why I also like Scottish Poetry Library newsletter), and I admire how many book reviews this journal tackles, including published "pamphlets." Since there are so many, they could be shorter but then again I admire the journal for giving new books so much space and attention (and organized in small  thematic groups) and I do find I learn new perspectives from these longer reviews. The poems are varied in style (from forms to experimentals) although I tend to like American Poetry Reviews varied selection better for some reason. What I'm not sure I like is the journal format. It's a huge journal and both the cover and inside paper are very thick. One thing that most irks me about AWP's The Chronicle magazine is their use of wide margins between unjustified column text. Reading that magazine is headache inducing. But Poetry London gets the multiple-column, unjustified text layout just right, thankfully.

The autumn issue has a good opening essay about risk taking, some poems I liked by Timothy Donnelly, Crissy Williams, Penelopy Shuttle, David Lehman, Jason Schneiderman, Nuar Alsadir, and Greg Delanty, an interview with Glyn Maxwell. The Autumn issue has poems I liked from Christopher Middleton and Mathew Dickman and an interview with Daljit Nagra on his recent reinterpretation of the Ramayana. My fiction-writing friend Julie also emailed me this very funny link to 30 Awkward Moments From Your Creative Writing MFA from BuzzFeed. The list was all very true and funny, but I absolutely loved the re-creation of the rejection letter: Charlie Bucket opening his golden ticket that says, "HA! REJECTED  GO FUCK YOURSELF Thanks for the App Money $" There's a version two of this graphic later on that is just as funny.

I also loved the puppy dog pic attached to "When feted, laureled, Pulitzer-anointed visiting authors tell you that publication’s not important, and you should write as if no one’s reading." If you're part of the Creative Writing MFA army, definitely check it out.