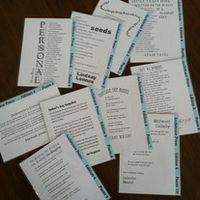 An entrepreneurial poet from my alma matter, University of Missouri-St. Louis, has started a business printing off poems in a business-model similar to iTunes, selling them one poem at a time.

Jennifer Tappenden started Architrave Press which sells poems individually printed on cardstock or sold as part of a subscription.

I've been thinking about subscribing to this for a while. These poems would be great to frame and cover office walls with or as items to include in snail-mail letters.

Find more about the press at: http://www.architravepress.com/

Or visit her online store at: http://architravepress.storenvy.com/

I read about her in my alumni magazine. I love hearing about poets who are thinking outside the book...in truly productive and community-affirming ways.

Sometimes I get the feeling the state of poetry isn't so far from the state of the 2013 Video Music Awards, with Miley Cirus writhing around in a bra and panties, with her tongue hanging out, waving a big foam finger. Then some reporter on CBS interviews Cher (because her new album drops on Tuesday) and goads her into saying a bunch of negative things about how soulless and cynical and artless Miley's performance was. Then the next day Cher has bitch-slayers-regret and apologizes for allowing herself to be encouraged to be so harsh about a fellow female performer all for the  drama of some network ratings.

Meanwhile, nobody's reading poetry because, although it's full of all the same drama, bitchiness and narcisism, it doesn't involve wigs and near-nudity.

Posted at 11:17 AM in Poetry Technology, Poets in Action | Permalink