The Case for a Poet in Tennessee Williams 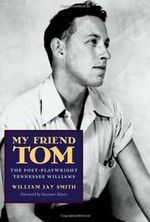 I can't tell you of many good literary rags from St. Louis, Missouri. Although I lived there for almost two decades (1977-1995), I was not connected in to the literary scene. I could tell you all the animal welfare organizations I used to belong to, however, from my futile and depressing animal rights involvements when I was 21. The only holdover of literariness I still receive from St. Louis is the literary review belle lettres from Washington University, the university Tennessee Williams attended.

Notably, we didn't study Tennessee Williams in either high school or college in St. Louis. I assumed this was because he was controversially gay and plays like Suddenly Last Summer (I only saw the movie but it was brilliant) were often gay. We did read plenty of depressing Russian authors so it couldn't have been his sense of tragedy. We also studied T. S. Eliot briefly; but only briefly because he was, after all, an ex-patriot and therefore an anti-midwestern snob. But we still were forced to read "Love Song of J. Alfred Profrock" before we were ripe for it. Why no class in Tennessee Williams at the University of Missouri?

Anyway, belle lettres just reviewed the new book on Williams, My Friend Tom,  by William Jay Smith who was in a casual university group with Williams called The Poetry Factory. Smith makes a compelling argument that Williams (due to his descriptions, stage directions and early poems), was more of a poet than a playwright and that his final, experimental plays have been misread and his entire oeuvre should be reconsidered as poetry. The book reviewer (and Wash U professor of drama and comparative literature) agrees, which is a significant enough opinion for me to jump on board with that.

Posted at 05:04 PM in Books to Read, Poetry News | Permalink

Are you accusing T S Eliot of being a snob! Frankly I find that ridiculous. He loved most his life as poet in London. He was probably more British in temperament than American. Is that some defect in his character.

As a playwright Williams was brilliant, but I found his novels distasteful. I have not read his poetry. Should I?

I have come to appreciate Eliot as an adult and don't see him as a snob today. But ridiculous or not, in St. Louis (in high school and college), there was a feeling that he was a snob. As it was put to me, he was an expat with a distaste for Americans and mid-westerners. Looking back, there might have been some mid-western insecurity at play, assuming Eliot perceived St. Louis to be provincial and unsophisticated. I have no idea if he ever made any comments about St. Louis. Tennessee Williams loathed St. Louis. Somehow that was seen as a better alternative than feeling superior to it. However, Williams was never taught in any of the programs I attended, probably due to those controversial themes.