A Book (and My Thoughts) About Modernism 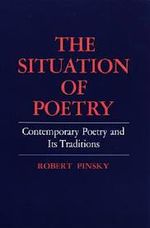 When I was at Sarah Lawrence College in the mid-1990s another book poets mentioned in passing was this 1978 collection of thoughts on modernism by Robert Pinsky, The Situation of Poetry. I bought the book with the uber-boring cover seen to the left, not the more interesting version depicted below. Since Pinsky was U.S. Poet Laureate around that time, I mistakenly thought the book was going to be about the situation of poetry at that time. What Pinsky meant was the act of situating poetry in a context.

It's been a dust-magnet on my bookshelf since 1997. I've tried to read it a few times but only succeeded in using it as a sleep aid. It's dense, akin to a post-graduate lecture. I would argue it's needlessly obtuse but then there are some out there with a taste for that sort of thing.

In any case, now that I'm too broke for new books, I've taken it upon myself to read the ones mildewing on my bookshelves. This one was, as I am fond of saying, a slog

to get through and I wouldn't recommend it. But I did learn some things reading it. Pinksy illustrates the connections between ideas in Romanticism and those in Modernism and he shows how modernism works in particular styles of writing, from persona writing to  descriptive to didactic writing. In fact, I found his last chapter on discursive poetry to be the most passionate and convincing.

I also thought he did a good job at defining Modernism as "a dissatisfaction with the abstract, discursive, and conventional nature of words as a medium for the particulars of experience." He later describes a nominalist poem* as "logically impossible. Language is absolutely abstract, a web of concepts and patterns; and if one believes experience can consist of unique, ungeneralizable moments, then the gap between language and experience is absolute. But the pursuit of the goal or the effort to make the gap seem less than absolute, has produced some of the most remarkable and moving poetry..." Later, he says, "The terms of language are too human and too grandly abstract, ever to capture the impenetrably casual, fragmented life of physical things. Close as a poet may come, his poem consists of terms, not things."

I'm torn about the whole era of Modernism and its experiments in order, language and meaning. I'm also torn about its sequel of Post-Modernism (meta-writing and irony, although I was raised on it).

On one hand, I find the conversations about language and sense-making stimulating because I romanticise intellectualism and I see this kind of discussion as pure versus applied science and therefore worthwhile. On the other hand, experiments can go on a bit too long. My grade-school age niece was recently sent to the principal's office after an incident in music class. She was made to sit through a long lecture on whole and half notes. She eventually became frustrated and cried out, "We get it!"

Along those lines, my mother came to visit last week and brought a recent USA Today article on Joyce Kilmer and his poem "Trees." The article was about how every child in American was once made to memorize Joyce Kilmer's poem. Journalist Rick Hampson argues that memorization is a beneficial way to learn the mechanisms of poetry and rhetoric. But reading the article, I froze at the first famous lines:

I think that I shall never see
A poem lovely as a tree...

But of course, words fail. The Modernist knew it. You know it. I know it. Even Kilmer knew it. Turns out a few million or so elderly Americans were forced to memorize the idea.

What I can't connect with is the emotional involvement in the limits of language. I mean as a student, I like the essay. But as a matter of religion, I don't subscribe. As soon as you cross over the line and start to worry and fret about the gap between language and experience, it can only become madness.

How do we deal with language as a flawed system?

There are two things that help me deal with broken things: ceramics and Zen Buddhism. When I took my first class in pottery making years ago, I had to learn how to think in shapes. I've spent my whole life thinking in words. This was a mind-blowing change for me and by the end of it words and the business of using words ceased to be sacrosanct for me. In fact,  I started to wonder if shapes were maybe a higher, if not equal, form of thinking about being. In any case, ceramics taught me I could be spiritually satisfied to create in a wordless world.

Zen Buddhism asks me this: what exactly is it that I dislike about imperfection, beyond the fact that the thing or system is not perfect? There's a gap, but why is that cause for anxiety? Because my attempt to communicate and be understood will be imperfect? My desire for perfection is the cause of my suffering. My desire for words to be more than they are is the cause of my suffering. I cannot change the gap. I cannot have a world of perfectly-grown uniform trees either.

But wouldn't such a thing be creepy?

Forget about the complexities of our inner lives, politics, and contemplating ultimate reality. Let's just deal with the frickin tree. If the word approximated the tree in any absolute way, what the hell would we need the tree for?

*Nominalism: holding that abstract concepts, general terms, or universals have no independent existence but exist only as names. (Free Dictionary)