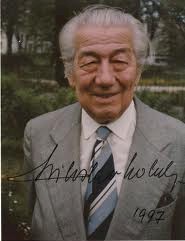 Years ago, I came across some poetry of Miroslav Holub in The Vintage Book of Contemporary World Poetry. I bought a used copy of his book Poems, Before & After which has been sitting on my shelves for a year or two.

This book was another surprise for me this year. I started to make a list of the poems I liked in this anthology and I was checking off every single poem so I gave up the list.

Holub was a Czechoslovakian poet and well-established microbiologist. His poems are a lovely melding of science and humanity. The book is divided into poems before 1968 and poems after 1968, the year the democratic revival was crushed by the Russians.

He has great commentary about poetry. The prose piece "Although" talks about how "a poem arises when there's nothing else to be done" and "art doesn't solve problems but only wears them out." From "The root of the matter"

There is poetry in everything. That
is the biggest argument
against poetry...

...the root of the matter
is not the matter itself.

...poetry should never be a thicket,
no mater how delightful, where
the frightened fawn of sense could hide.

These poems in their surreal escapades reminded me of my favorite short story writer, Donald Barthelme, and are elemental weavings of the scientific, the haunting, the human and the moral. The poem "Evening idyll with a protoplasm" is a good example:

Over the house spreads
the eczema of twilight,
the evening news bulletin
creeps accross the facades,
the beefburger is singing. 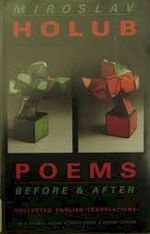 well-that's-life
bulges from all the windows,
tentacles with sharp-eyed old hags' heads,
it engulfs a pedestrian,
penetrates into beds across the road,
swallowing  tears and fragments of quarrels,
pregnancies and miscarriages,
splashing used cars and television sets,
playing havoc with the price of eggs,
simply puffing itself with adultries,
crossing off plotting spores of
things-were-different-in-our-day.

between featherbed, plum jam and stratosphere.﻿﻿﻿

All the poems expertly mesh contemplations on biology with the horrors of humanity. Some of my very favorites are "Heart Failure," "The end of the world," and "Reality." The After poems are darker, more cynical, and incorporate more storytelling. I loved the Brief Reflections On series, "Brief reflection on test-tubes" being my favorite. He delves even more deliriously into language in this section.

The book ends with some poems laid out in theatrical script that read almost like avant-garde short films. Of those "The Angel of Death" and "Crucifix" are my favorites.

Posted at 12:32 PM in Today's Pillar of Poetry | Permalink