Today I took a book off my shelf, Richard Hugo's The Triggering Town, and randomly opened it to a page with this quote:

"The poet might have expanded the possibilities, even if he had to fictionalize the situation to do it." -- Richard Hugo

I know there are some poets who feel committed to their role as a poet who is a witness to the truth. And I honor and respect that path (although it is not the one I've chosen).

However, I submit to everyone that the imagination may know how to tell truth better than the facts. Or to put this in terms anyone who watches The First 48 on A&E can understand (I've been 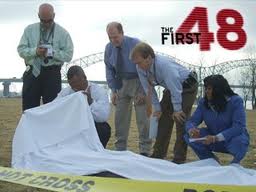 addicted to that show for years and years now), you come to realize facts are often as nebulous as our memories or our imaginations.

Fact itself is a fictitious word. This is why the United States now is in fisticuffs  over politics and bi-partisanship. One man's facts are another man's spin.

But this is no reason to give up all hope and start writing language poems (although I honor and respect that path, it is not the path I've chosen). The ultimate truth is out there. But maybe you just shouldn't rely on facts to take you where you need to go.

By the way, that First 48 cast up there is my favorite team, the Memphis homicide detectives: Tony Mullins, Lieutenant Toney Armstrong, mystery 3rd guy, Mitch Oliver and Caroline Mason (she's an investigative inspiration and a prototype of a character I'm working on for a novel...I love her!) I'm going to log off right now and watch another episode.