Oscar Wilde Gives Advice From the Grave, Treasure Hunting with a Poem and Other News 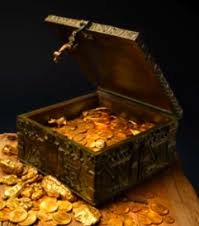 Oscar Wilde Says Don't Give Up Your Day Job

A draft of one of Oscar Wilde's famous sonnets and his advice to a young writer surfaced this week. He said:

"The best work in literature is always done by those who do not depend on it for their daily bread and the highest form of literature, Poetry, brings no wealth to the singer.

Make some sacrifice for your art and you will be repaid but ask of art to sacrifice herself for you and a bitter disappointment may come to you."

Read the full story at http://www.telegraph.co.uk/culture/books/9939664/Literary-success-Dont-give-up-the-day-job-advised-Oscar-Wilde.html

Millionaire Forrest Fenn was diagnosed with cancer and concerned that he couldn't take his loot with him to the afterlife. So he buried a for-real treasure chest of gold, diamonds and emeralds somewhere in the state of New Mexico. He's left nine clues to its whereabouts. But treasure seekers will have to spar with a cryptic poem called  "The Thrill of the Chase" to find them. He hopes this will inspire Americans to get their kids "away from their little handheld machines." I like his idea but have a feeling people and their kids will use handheld machines and social media to find it.

Read the full story at: http://now.msn.com/forrest-fenn-has-buried-treasure-in-new-mexico

Oxford American Does an Interview with Poet Miller Williams