« Oscar Wilde Gives Advice From the Grave, Treasure Hunting with a Poem and Other News | Main | A Book About Childhood »

My job at the Institute for American Indian Arts is set to end in a few weeks. I've been filling in as the Faculty Assistant until the school picked a full-time replacement. Mr. Big Bang and I will be moving in two months to parts as yet unknown. I figured I better peruse their library real quick to read those IAIA writers I've been meaning to read. 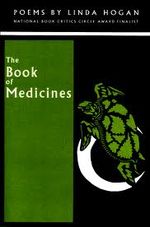 Linda Hogan's name came to me from one of my podcast explorations. She's an IAIA alum. From the library I chose her 1993 collection The Book of Medicines. Her poems in this book are flowing, meandering myths and stories, lots of fishermen and birth poems. The first poem, "The History of Red," covers the "wet mask of birth...already wounded/stolen and burned/beyond...how life stands up in this skin...This life in the fire. I love it./I want it,/this life." "Return: Buffalo" begins "One man made a ladder/of stacked-up yellow bones/to climb the dead/toward his own salvation./He wanted/light and fire, wanted/to reach and be close to his god."

"Harvesters of Night and Water" has the great line: "fire flashes from the gun/like a flower that blooms/madness/and is gone." And Ilove the opening of "Crossings," where "there is a place at the center of the earth/where one ocean dissolves inside the other/in a black and holy love."

The other side thematically repeats throughout the book: across a river, the sea bottom, the dangerous side, "in the land of the terrible other." Her poems read like incantations with the repeated verb formations of "it is" and "it has been." Her titles are spartan: "Skin," "Salt," "Bear Fat," Tracking," "Milk." Although all of this produces a calm, spiritual feel to the work, it also has a distancing effect.

My favorite poems where in the second section, "Tear" about torn femaleness and survival, "Chambered Nautilus" which is still mythy but more personal and dramatic with lines like "because everything that lived had radiance/like the curve of water and shell/of whatever animal/still inside/that has brought me here" and the poem "Drum" about hearing from the womb. The poem "Partings" has a great ending,

It is true our lives
will betray us in the end
but life knows where it is going,
so does water,
so does blood,
and the full and endless dance of space.

James Thomas Stevens is teaching currently in the Creative Writing department of IAIA. He gave me a copy of this book, Bulle/Chimére (2006) a few weeks ago and it felt serendipitous because I had just heard Sherwin Bitsui praise him on one of my poetry podcasts. In this book, Stevens displays a quiet particularity as he dissects the fragility of a new love affair. The poems are fantastically grounded yet infused with the scientific (and the French). The book is full of juicy words like "orblets of echo" and he plays on themes of the vulnerable bubble and the strange illusory nature of the "love artifact." I loved how he handles the physicality of love: with lines like the "stillness of your palms." Love becomes an abstraction but never loses the very corporeal experience of sex and of the touristic, alien place where the poems transpire.

His stanza and page breaks also serve the poems not only with moments of silence but give the poems scientific, almost Roman balance.  The poems are brief, spartan and controlled with lines like this from the poem "Lac de Laffrey" where "Goats walk backwards/down the streets of Cholonge/and the tinkling returns to the bell" which is so particular in place. A line later in the poem zeroes down to love's fatal break, "Cupid/loses his bow/out the backseat window." The title sets of poems dissect the alternative meanings of Bulle and Chimére within the context of the relationship and its personalities, "Chimére I" stating, "I have stood at the confluence of two improbably rivers, the roaring and the meandering." By the time we read the poem "Thames," the lovers are in trouble, "And I am reminded that there is always a rabbit./Some frightened fancy fleeing zigzag before us." The lovers are "Flight-denied/and tethered to trees." In "St. James Lake" the heart has turned into "the frightened flocks we carry...How idyllic, how monstrous/the responsibility for these many birds." Every page is full of this symbolic surface tension and always startled by touch, all working to serve the very last line of the book. With it's ornate reasoning, these poems remind me of Anne Carson and I loved it. 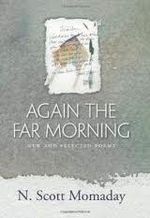 I wanted to like the selected poems of N. Scott Momaday (founding faculty member of IAIA), Again the Far Morning (2011) more than I actually did, especially since everyone loves his novel, House Made of Dawn, and my husband told me he talks like George Takei. But honestly, it felt like required reading. There were many poems that didn't connect with me, although the book is rich in forms: iambic pentameter poems, rhyme schemes, ballads, quatrains, tercets, couplets, free verse, prose poems and list poems, all of which Momaday handles well. His poem "Colors of Night" reminded me of Hogan's "History of Red" and Natalie Diaz's "The Red Blues." There were also a few poems in here I did love, mostly the Zen-like pieces similar to this four-line poem, "The Gift"

Older, more generous,
We give each other hope.
The gift is ominous;
Enough praise, enough rope.

This feels ominously like where I exist today in this world of supporting poets. I love the inset of watercolors overwritten with poems. I loved "Prayer for Words" ending in a stanza that felt typical of his work: "I am the rattle or mortality./I could tell of the splintered sun. I could/Articulate the night sky, and I had words."One of my favorite prose pieces was #3 in "The Threads of Odyssey" about a homestead falling into ruin..."I want with all my heart to save it....for it is one of the homes of my spirit."

There were also cultural pieces I liked. In "Division" he says "The scales upon which/We seek a balance measure only a divide" and "The Modesty of Relics" is a succinct admonition to archaeologists,

How just wilt be my silence when
You look upon my hair and bone
Reflect upon my grace and then
Subvert my meaning to your own.

There's also a poem in memory of John Merrick, the Elephant Man which seems significant to me only because of an art tour I attended last year near Santa Fe. I met a woman who referenced her husbands writings on local history. When I asked him what he typically worked on, he deprecatingly stated he was primarily a playwright. I responded with a uncontrollably disappointed "oh." Later I find out he wrote the play The Elephant Man." During our conversation he name-dropped Momaday as a friend of his, a factoid that did impress the poet-fucker in me.

"Winter Arcs" feels like a good writing poem. "The Dead of Winter" is a good ghost poem. His "Notebook" blurs reminded me of Theodore Roethke's similar pieces in On Poetry and Craft, my favorite one being the very New Mexico description: "The village. The smell of piñon and juniper smoke. A black storm descending into the canyon. Pasole simmering. All is well."

Another favorite was the last poem, "The Rolling" which talks about words before meaning, words "not yet in our keeping." We don't have to slip into meaninglessness when confronted with the difficulty of naming. What is "beyond the mind's reach" can still be honorable.

Arthur Sze is a professor emeritus at IAIA. I've only seen him come by once or twice for a visit. From the library I picked out two of his books, The Ginkgo Light (2009) and The Willow Wind (1972), translations from Chinese poems. Ginkgo Light is full of East/West fusion, between Chinese history and New Mexico desert. Early poems "Chrysalis" and "Crisscross" are typical of how Sze gently strings together glimpses of things in collages or abstract puzzle pieces of a whole. From "The Gift,"

The pieces of life stay pieces
at the end; no one restores papyrus

once it has erupted into flame;
but before  agapanthus blooms,

before the body scorches, razes
consciousness, you have time

The past and present co-mingle in atmospheres of small actions. In the title poem, "each hour teems" and "love has no near or far" which shows how the collage congeals when I read the line as "love has no fear." Cool trick there. Sze pastes together juxtapositions of beauty and violence. He observes without comment and the comment lies in his choices. The poem "Power Line" shows the fusion of East/West: "a woman lays in an imperfection before/she completes her Teec Nos Pos weaving;/a sous-chef slices ginger, scallions,/anticipates placing a wet towel over dumplings." "Departures and Arrivals" is one of my favorite poems here and ends with "how we thirst and renew our thirst in each other." The second poem of "Completion" is beautiful in its brief tricking lines, "when is joy/kindling to greater joy?"

The Willow Wind by Sze is half translations of Chinese poets Tu Fu, Wang Wei, Li Yu, Tu Mu, Li Shang-yin, Wang Han, Liu Tsung-yuan and Yen Chen. The second half are original poems by Sze. I read the book in one sitting. In his own poems, he makes frequent use of the forward slant character "/" and I wasn't sure if he was depicting dichotomies or using the character as a kind of separator. The poem "Bird / Call" is indicative:

the circle of the sun
is clear
and I dare to
touch the rim
with my / distant hand.

It is interesting to see how Sze is influenced by the Chinese poems at the beginning of the book. I liked "Pacifia" with lines like "these stones are impenetrable. They open/only from the core, like seeds;/then the weight becomes magical,/medicinal, and green," and the poem "Be the Death of Me" about heroin, "Sliding Away" about death and the final poem, again seeming to connect me to New Mexico like spaces:

A singer with eyes of sand they said--
the western wind
sweeps me home,

and I am carrying you, my desert,
in my hands.