Poets Socializing and Readings in February 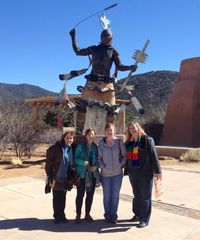 I was happily tied up for the past few weeks with some visitors to Santa Fe and some small readings locally. On February 4, I attended an open reading in a little theater called Teatro Paragaus, a reading hosted by the New Mexico State Poetry Society-Santa Fe Chapter. I read "Imagine Mars" and "Why Photographers Commit Suicide."

I don't know why we call them readings. So poet-centric that is. Shouldn't we say, "I'm going to a listening" because the majority of people are listening? Ok, maybe not.

Anyway, it was my first reading since October of 2004 when Julie Wiskirchen and I read excerpts from St. Lou Haiku at the St. Louis Public Library and the first St. Louis Book Festival held in Forest Park. I didn't do particularly well for open mic nite. My reading was inordinately breathy and too close to the microphone. Later I thought: to be new may be brief; but to be new is a relief. Plenty of time for improvement. My goal was to practice ways of being as a poet: to be open, connected and friendly. As much as I tried to focus on my specific tasks: to honor the time rule, to pay attention to my body posture, facial expressions and to smile, it was all thrown to hell when the MC mispronounced my last name as McCreely. This is surely due to my bad, post-carpel-tunnel handwriting on the sign-in. The MC for NMSPS, Jim Raby, is actually a very good energy and excellent at corralling all these open mic poets. My husband took photos but unfortunately these were lost when, a few days later, I went to update the software on my iPhone and it crashed. I lost about 9 months worth of data.

My reading the following Friday, February 8, at Highlands University as the inaugural speaker for The Women for a Change Club went much, much better. I had the full hour to myself and not only had time to talk about the poems in my book in depth, but I had time to have a conversation about the amazing publishing changes afoot in the world, (the pros and cons of self-publishing versus traditional), and most importantly (since this was an audience of academics), how poetry can be used in academic research (with examples directed toward some of the archaeologists in the group). This reading went very well. Considering my sucky open mic, I was surprised. But apparently some enthusiasm and humor, my knowledge about technology from years working at ICANN, and my spirit of DIY came through. I read "Imagine Mars," "The Birds of Mars," "Helga in the Park," and "Why Photographers Commit Suicide."

The only piece of the talk I left out, by mistake, were three very interesting and apropos NPR interviews I had discovered the day before:

The room was full and many stayed afterwards to talk about poetry and their prior experiences with poetry. A very good conversation overall.

The next week was spent furiously cleaning our house for the reunion of the Sarah Lawrence women in Santa Fe over Presidents' Day weekend. Sherry Fairchok (technical writer at The Gartner Group and author of the book of poems Palace of Ashes) and fictioneers Murph Henderson (Theater Specialist at the Pew Center for the Performing Arts) and Julie Wiskirchen (coordinator of Santa Monica social events and the visiting authors program at Google, co-author of St. Lou Haiku and co-editor of Ape Culture) came from Bronxville, NY, Philadelphia, PA, and Los Angeles for a weekend of tooling around Santa Fe. I had a fabulous time catching up with them. On Saturday we visited the Folk Art Museum and saw the Annie Leibovitz show Pilgrimage at the Georgia

O'Keeffe Museum (because my husband works there, I was able to attend the opening reception a week earlier with Annie Leibovitz). Julie and Murph had Frito Pie down on the Plaza and we all ate dinner at La Plazuela in the La Fonda Hotel for dinner. Sunday we went to Pecos National Monument and visited the Greer Garson house. Then went to Las Vegas, New Mexico, to see the Victorians, Highlands University and the Plaza Hotel. We ate Mexican food at my favorite restaurant there, the Original Johnny's Kitchen.

Now I'm getting back into the swing and sway of Big Bang Poetry! I have been exploring some interesting poetry podcasts, memberships and books. More to come soon.

Posted at 02:14 PM in Lifestyles of Poets, Publishing | Permalink