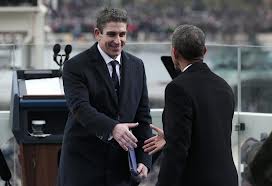 So the poet of the hour is Richard Blanco, the man who made a hit of himself during Monday's inauguration of President Obama.

When he came on to read "One Today," Mr. Bang Bang asked if that was Ben Stiller or Paul Ryan.

Poems for public occasions, especially big ceremonials like this, are tricky. You can't lay out an arty opus that will fly over the heads of folks in TVLand. You have to invoke the big ponds and rocks of America. You have to highlight Americans, like Blanco did with his repititions of faces and hands. You have to invoke plebeian things like cabs and groceries. The editor in me would have dispensed with the 7th stanza. There is much awkwardness in the mishmash of:

weaving steel into bridges, finishing one more report
for the boss on time, stitching another wound
or uniform

But there are plenty of good lines in there:

on our way to clean tables, read ledgers, or save lives--
to teach geometry, or ring-up groceries as my mother did
for twenty years, so I could write this poem.

...the impossible vocabulary of sorrow that won't explain
the empty desks of twenty children marked absent
today, and forever.

[a somber nod to the Newtown, Connecticut, shooting]

[that would be invoking both of my particular great-grandfathers]

...the plum brush of dusk

Read the full poem.
Watch a video of Blanco reading the poem.

The Daily Beast called the poem "Whitman-esque...a grand tour of the continent." William Wright of Southern Poetry Anthology called it "incantatory, an optimistic, careful piece meant to encourage, a balm."

Blanco's charge was probably to write about unity...in a multi-cultured way. I don't know how far he'll get bringing opposing sides of the Washington D.C. together however.  After all, only five poets have contributed to presidential inaugurations. And those five have all been invited by Democrats. Do Republicans even believe in global poetry-ing?

Blanco read his poem in that overly-serious poet cadence, as you do. After he finished, the massive crowd gave him some polite clappings (not the roaring ovation of Obama or even Beyonce) and Chuck Schumer (who I voted for by the way, years ago when he was first running and I was living in New York City) gave a slight indication of discomfort in the transition, as to say "Ok, now we did that. Moving on." I thought maybe Blanco didn't go over. But he did! People were talking about him on MSNBC and the next morning on The Stephanie Miller radio show and even my co-worker remarked about it. Turns out Blanco broke some records Monday and people were proud of him. Not only was he the youngest to have read a poem at an inauguration, he was the first immigrant, the first Hispanic and the first openly-gay poet to do so. Wow! The poet is office-cooler worthy conversation this week! What a great thing Richard Blanco did for us!

Blanco's poetry website is also very good. I'm excited when poet even has one! The site is very simple and the left-hand menu is full of action items to draw you in: Meet (interviews), Read (books), Listen (recordings), Look (press kit), Contact (all the major social media icons are represented). Blanco if anything might be just a little too slick. He's got a publicist, a speakers agency (Blue Flower Arts no less), and a manager! Blanco's website proved its own importance this week as various news stories culled quotes from it.

His Wikipedia page also peaked my interest to read his 2012 book Looking for the Gulf Motel, specifically the poem "Queer Theory: According to My Grandmother" with lines like:

Don't stare at The Six Million-Dollar Man
I've seen you.

The history of poets at presidential inaugurations

Robert Frost read "The Gift Outright" at John F. Kennedy's inauguration in 1961. It was not the poem he intended to read. "Dedication" was. 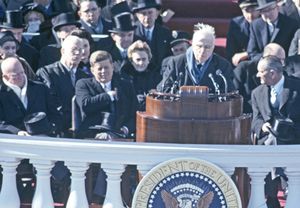 Maya Angelou read "On the Pulse of the Morning" at Bill Clinton's first inauguration in 1993. Poets spent much time hating on that poem although the event made her famous. Watch her read it at the inauguration; she's introduced as Maya Angelow. 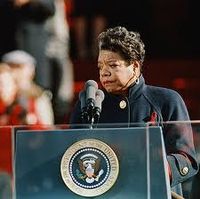 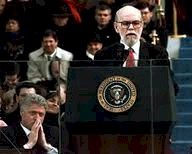 Elizabeth Alexander read "Praise Song for the Day" for Obama's first inauguration in 2009. Watch her performance on video. 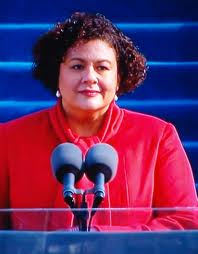 Posted at 07:17 PM in Today's Pillar of Poetry | Permalink