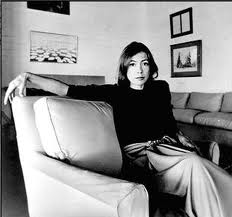 Look at that...this old picture of Joan Didion has a picture of that Georgia O'Keeffe cloud painting in the background. Huh.

My husband and I just spent Thanksgiving in New York City. I hadn't been there for years (ever since I moved to LA in the spring 2002 after deciding not to move back to NYC after 9/11). I missed the Christmas-ness of the city, the bagels, the pizza, a knish from a food truck...and good Chinese food. So we had Thanksgiving dinner at Hop Kee restaurant in Chinatown. We also saw The Book of Mormon (hilarious and thought-provoking) on Broadway, the Katharine Hepburn costome show (loved it!) at the NYC Public Library of Performing Arts and the African Burial Ground National Momument (somber and important monument; usually when you talk about proper regard for a culture's human remains you think of Native Americans, but this moment shows how African Americans struggle with similar treatment and how they make maybe different choices on how their cultural remains should be treated).

For the trip I borrowed the book Blue Nights by Joan Didion from my local library for airplane reading. I first heard of Joan Didion when I was at Sarah Lawrence. Fellow students loved her writing and how she handled "place" when talking about New York City and Los Angeles. I had never been to Los Angeles and it all sounded too high-brow for me so I avoided her. Then I moved to Los Angeles and had the opportunity to read her book Where I Was From and then I understood what everyone was so gaga about. I read everything Didion I could get my hands on, the ultimate book being The Year of Magical Thinking about the illness of her daughter and sudden death of her husband, fellow LA/NYC writer John Gregory Dunne.

Blue Nights picks up where Year of Magical Thinking leaves off, with the eventual death of her only child. In fact, the books should probably be read together. In Blue Nights, Didion is left alone and ailing and she recounts more of her memories from Los Angeles and NYC as they pertain to motherhood in the 1960s and 70s. This is a short book...maybe 168 pages so I never could bring myself to pay the near $30 price when the book first came out.

But Didion does an amazing thing in those 168 pages. She essentially writes a very long poem stringing together her mourning over the death of her family with her fear of dying. Lines are repeated over and over like a kind of obsessed villanelle, but one that is drawn out almost to transparency. You keep asking yourself, what do these two things have in common, dying and mourning (are they slapped together arbitrarily?). In the last half-page of the book, Didion tells you why, quite amazingly and beautifully, laying down the hammer in the very final line. It's masterful. And if it aint poetry...nothing else is.

Posted at 04:54 PM in Today's Pillar of Poetry | Permalink

Anyone exhibiting a Georgia O’Keeffe on their wall is incapable of writing poetry.

Well, that judgement counts me out then. Monsieur Big Bang was once a security guard at the G O'K museum in SF, NM. Lots of G O'K books and prints around this place. But I don't see the connection between the two. Can you elaborate? Or are you just making a dismissal around personal opinions of taste? That's entirely human but in that case I would highly recommend to you the book "How Pleasure Works : The New Science of Why We Like What We Like" by Paul Bloom.