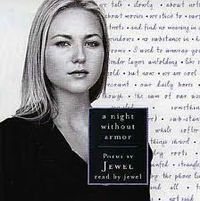 In graduate school it was one of our more sinister pastimes to mock celebrity poems. Part envy, part smug critique, it all started with folk singer Jewel when she published A Night without Armor in 1998. Here's a sample:

I Miss Your Touch

She gets the juicy word taciturn in there but then leaves it alone to defend itself against the word all. Amazingly, people are still making fun of Jewel poems these many years later...like this piece from Funny or Die: Was This Poem Written by Jewel or Charles Manson: http://www.funnyordie.com/articles/3e2e0d2765/was-this-poem-written-by-jewel-or-charles-manson?playlist=featured_pictures_and_words 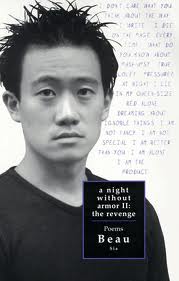 To be honest, I never read her entire book. But that didn't stop me from buying Beau Sia's spoof in 1998,  A Night Without Armor II. It's well-maintained inanity. Some examples:

I want
you
now.

do not think
about this.

we are in love.

if we die
tonight,
we
might as well
be having
the greatest sex
of our lives.

with each other of course.

only one girl I kissed
did not love the rain

they were all still crazy
though.

that's why
poems about the rain
work so well
on a woman's thighs.

we all aspire to learn
more
about clouds.

After Sia's book, I sought out celebrity poetry. I waited a long time for the score of getting Suzanne  Somers' 1974 book Touch Me off eBay. The book has no table of contents or even page numbers and there are 23 poems broken across 4 or 5 sections.  Every other poem is also facing a black and white, soft-focus photo of Somers looking peaceful or contemplative. Poems are titled "Organic Girl" and "Houseplants" and "Last Night it Was Right." Some examples:

I have lied to you
A thousand times
Reshaped the truth
To keep you close
And avoid hurting you.
But I always lied with words.

Last night I lied to you
In silence
With my hands, my mouth, my caress
The worst lie of all.
And now I know something is over.
Because before
I only lied with words. 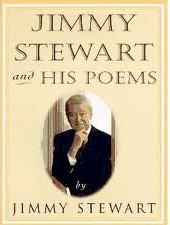 The absolute worst was in Jimmy Stewart's book, Jimmy Stewart and His Poems from 1989. I found this at a garage sale and couldn't resist the self-satisfied stare of Stewart from the book cover. It's a mere four poems covering 31 pages, each poem prefaced with long passages explaining the context of each poem. Indulgent much? Some examples:

The North Pole's rather chilly.
Those who've been there all will tell
There's lots of snow and lots of ice
And lots of wind as well.

An iceberg's really never warm
And takes a while to melt.
A snowball's not the hottest thing
That I have ever felt.

from I'm a Movie Camera

I'm a movie camera. Instamatic is my name.
I'm Eastman's latest model,
Super 8's my claim to fame.
I was on a shelf in Westwood
when an actor purchased me
And took me home to 918 in Hills the Beverly.

He never came to me when I would call
Unless I had a tennis ball,
Or he felt like it,
But mostly he didn't come at all...

Discipline was not his bag
But when you were with him things sure didn't drag.
He'd dig up a rosebush just to spite me,
And when I'd grab him, he'd turn to bite me.

I know what you're thinking and no: there is no indication on the cover or inside that these were written for children.

But I'm done goofing on bad poetry. I've decided it's a psychological sink hole. You feel superior for a little while but then you end up feeling inferior deep down where you don't want to admit it. Who am I to begrudge another person's poetic journey? Snob it up at your own risk, I say. You might be reincarnated as someone who dresses up in kabuki makeup and writes such things as "Lick it up."

Besides, there are amazing celebrity "poems" out there. Many poets were once transformed by Bob Dylan or now Lucinda Williams.  Joni Mitchell changed the way I write. "The Last Time I Saw Richard" is one of the few "poems" I've ever memorized. And Leonard Cohen...wow. What these writers can do is make up for a lot of dreck in the world, some of it most likely mine in all those petty previous lives.

Posted at 07:25 PM in Lifestyles of Poets, Poets in Action, Think Outside the Lament, Whole Life of the Poet | Permalink