So we've been talking about how working on thinking skills can help your poetry. I know there is some resistance to this idea, as if the creation of poetry is only natural thinking, without effort. I agree that some degree of organic inspiration is involved, however thinking about thinking is still a crucial component of both gaining wisdom and communicating your wisdoms. Consider the competitive runner. Although "getting into the zone" is important, so is practice and the harder she pushes herself (within safe limits), the more races she will run.

Which brings me to the next point: reading essays and books about theory and thinking can be dry and difficult. "It's too hard! It feels like college!" my fellow writers whine. Don't fret over the stuff that's too dense to penetrate right away. Read through it and glean what you can. As long as you're always learning, as long as your mind is always working and thinking and making some connections--you don't have to understand all of it. The next babble of theory will get easier.

I hit the same wall when I started reading pop-culture theory this year (I am also, after all, Cher Scholar). Pop culture books can be even more esoteric. But if you keep coming at concepts and ideas from different angles, the better you'll run.

Thinking in Writing by Donald McQuade and Robert Atwan is, as I've mentioned before, a good overview on ways we organize our thoughts.

For years I've had Literary Theory, A Very Brief Introduction by Jonathan Culler on my bookshelf. Last week I started reading it and although it was a hard slag at first, it should be required reading for all writers, especially poets.

To understand how the car runs, it's always good to know how the parts all work together. How do poems create meaning?

"...theory involves a questioning of the most basic premises or assumptions of literary study, the unsettling of anything that might have been taken for granted: What is meaning? What is an author? What is it to read?"

Although you may not think these big ideas matter to your little poems, thinking about these things can take you down some new and amazing intellectual paths. And it's helpful to know how the critics and theorists qualify various rhetorical tropes.

Many lament the fact that college curriculums (not to mention bookstores and large book-fest events) focus almost entirely on fiction, while poetry (once the definition of literature) gets the short shrift. Culler elaborates on why this is:

"This is not just a result of the preferences of a mass readership, who happily pick up stories but seldom read poems. Literary and cultural theory have increasingly claimed cultural centrality for narrative. Stories, the argument goes, are the main way we make sense of things."

So you see, this is what we are up against as poets, this is what our own intellectual peers have surmised about the value of poetry versus fiction. Ignoring the reality won't help poetry as a art form and it probably won't serve your individual poems much either.

Sitting on my desk at IAIA, stuffed behind one of those ancient phone-message books (the ones with carbon copies no less), I found a little blue mini-book called The Miniature Guide to Critical Thinking, Concepts and Tools. What a find! I haven't cracked it yet but I did skim through the graphics, great overviews of thought like this one (so sorry my scanner sucks!): 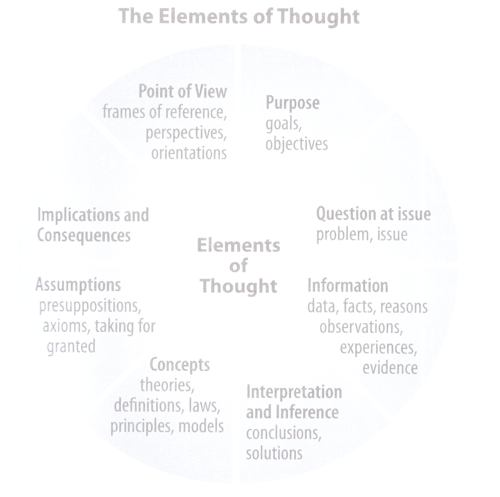