Review of Favorites, the Anthology of the Aurorean Journal 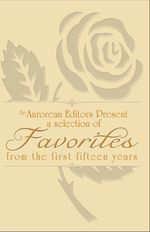 Fractions are killing poetry: fractions of the time the world has available to devote to reading it: books, anthologies and journals. Journals above all seem to bear the most of a slim readership. But they do the Lord’s work, big and small, famous and obscure, as a magnet for culling new poetry out from the wilderness. The great thing about a journal anthology is that we are able to read the best of the crop from all the sweat and labor of a journal’s works. It’s condensed goodness.

The Aurorean journal has published over 50 issues in the past 15 years and featured over a thousand poets. Editors Cynthia Brackett-Vincent and Devin McGuire have now compiled their Greatest Hits, an anthology called Favorites which is divided into sections that show exactly what subjects this journal specializes in: seasons, meditations and New England. Brackett-Vincent’s introduction provides and interesting tale of how she came to found and produce this poetry journal and the transformations the project has made over the years.

The Seasons section is full of “frost-warped” leaves and frozen ponds and starts strong with a poem by Lillis Palmer called “Planting Bulbs” where we find ourselves “breathing the humus-sweet cold air” as she describes bulbs who have a secret faith. I also loved Michael Macklin’s “The furrows” about the dead under our plows and Judith Tate’s “Yard Work.” I enjoyed Susan Wilde’s “when the television goes off in winter” and Virgil Suárez’s “El Hermitaño, My Friend Ryan Who Believes He Roamed Like Locust in a Previous Life” where the locusts can be heard in the fields like “strewn punctuation.” Monica Flegg’s “A Winter Farewell” was my favorite of this section, where emptiness feels like:

...a loss
a snowflake sized one
buried deep in this blizzard of a lesson.

The Meditations section struck me as primarily one of death poems. I liked Cynthia Brackett-Vincent’s “Kodi Ball,” especially as I believe there truly can never be enough dog poems in this world and Cathy Edgett’s “Healing:”

I drank grief like tea in Tibet,
Holding the cup with both hands

Meditations boast poems with dedications to a menagerie of inspirations, including poet Allen Ginsberg, Massachusetts Senator Paul Tsongas and Lake Superior and includes a variety of tributes to mothers (some departed), including the mother-ode I loved the best by Dellana Diovisalvo, “I Say Mother.” The section also includes one of the most tastefully poignant eulogies to the victims of 9/11 who felt compelled to jump from the burning towers, Clemens Schoenebeck’s “For the Angels, Unwinged.”

Since New England is commonly associated with the four seasons, the first and final sections have plenty of overlapping images of stone fences, frosted windows, sun-bleached shells, an interesting number of references to lichen, pitched roofs, harvests and one mention of Mount Washington I liked very much, Michael Keshigian’s “Upon The Roof” where:

I lived in Stow, Massachusetts for 5 months in the spring and summer of 1995 working at the Massachusetts Firefighting Academy, then returning often for visits after I started attending Sarah Lawrence College from 1995 to 1999; and this anthology reminded me of New England’s solid pastoral beauty, the salty Atlantic seashores, the bitter winter wind and the upstaging panoramas of leaves. The Aurorean tends to publish very compact poems, (many are thin and long, none are longer than a page), setting a serene descriptive scene or a moment’s reflections on a landscape, a general array of gentle points and soft landings. The book is full of quiet pools of thought or contemplations where you can, as Anne Dewees writes, “feel the earth breathe.”

I turned to my archaeologist husband to explicate the final brilliant poem of the book, one called “Faith” by Robert M. Chute. It was about Henry David Thoreau and arrowheads and faith. I loved it so much I copied it out of the book for taping up on my office wall.

To buy this anthology
To visit the Aurorean

Glade you liked "Faith". Perhaps if I keep mine I'll find an arrowhead myself some day. Bob. Chute

If you come out to the southwest, you will definitely find some arrowheads and sherds.

So sad The Aurorean is no longer. I published my first poem, a haiku, in the Spring 2001 issue. I lost track of the publication, sadly, but now find that I’m circling back to my old writing life. I still have a couple copies of the issue I was published in as well as the Winter 2000-01 issue. Thank you for that first publication. Wish you all the best. — Patricia Roy