Poetry headlines in the news

This week I found a few interesting checklists online for writing poems. Now I don't know any poets who actually use checklists to write or read poems, but I took a look anyway (maybe they'd be good for a friend or relative struggling through a literature class).

This first one is a checklist primarily for explication of poems: http://www.longwoodshakespeare.org/handouts/explication.pdf
However, it's so temping to want to read this list as a poet and feel you need to keep all these balls in the air when writing each poem. Which is crippling.

Better to focus on one or two skills at a time and let those seep under your skin and then move on, skill by skill. Then, one fine day, all skills will pull together for a masterpiece. It's inevitable, right?

Next, the Practical Poet has posted a checklist for Haiku: https://sites.google.com/site/graceguts/essays/practical-poet-creating-a-haiku-checklist

And here is yet another list formatted in an unattractive table:
http://www.huntel.net/rsweetland/literature/genre/poetry/checklistEvaluate.html

In some kind of freudian slip, I saved the checklist graphic for this post as "hecklist." But I don't want to heckle these checklists. I'm an obsessive list-maker myself. There are good things to draw from such orderliness and making your own lists here and there will be useful in organizing our thoughts. And a good thought is the gold at the top of anybody's checklist. Writing is only as good as your thinking. We always forget that. You can't string together a well-crafted poem without well-crafted thinking.

So if list-making scratches that hamster-on-the-wheel-in-your-head, it's a good thing.

Does your poem have utility?

In fact, I found the last item on all these lists to be the most worthy of consideration and reconsideration. Nobody talks about it much but it really is the most crucial force in determining a poem that succeeds with readers and a poem that doesn't:

Does it have ideas people can use?

Be honest. Does you poem have ideas people can use?

The Faces of Poets in Santa Fe

Last night I attended a reading in Santa Fe for Red Mountain Press, a micro-press focusing on poetry and memoirs of poets. The reading took place at my neighborhood performance space and was very well organized (poets introduced each other in a smooth-moving chain) and all was very pleasant except for the loudly hissing speakers.

Marc Talpert read from his book Altogether Ernest, a book written from the point-of-view of a 14-year old boy.
http://marc-talbert.com

Elizabeth Raby read a very funny passage from an upcoming memoir tentatively titled Ransomed Voices from the Emily Dickinson quote,
"Silence is all we dread. There's ransom in a voice."
http://vacpoetry.org/raby.htm

Gary Worth Moody read from his book Hazards of Grace. His poems included one about his father's death and about suffragette Inez Milholland. http://garyworthmoody.com

Donald Levering read some poems from an upcoming book and included topics about summertime repaving of roads, a few odes to the elements and a poem about the Sardine Queen's Ball.
http://www.donaldlevering.com/

Wayne Lee read some funny poems from his book Doggerel & Caterwauls including one about friends, one about rapatronic photography, and a funny new "found" psalm about baseball.
http://www.wayneleepoet.com/

Robyn Covelli read poems of a kind of unique surreal
clarity, including one called "Define What is Broken"
and one about Pagosa Springs in Colorado.

Susan Gardner ended the night with her delicate presentation of some new poems about the fires of New Mexico and another titled "Physics of the Iris."
http://susangardner.org/

To find their books: http://redmountainpress.us/

The Many Faces of Adrienne Rich 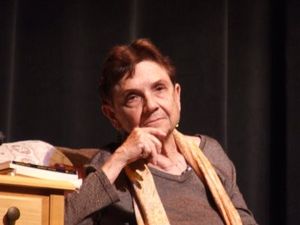 Adrienne Rich died in March at the age of 82. I had only one opportunity to meet her at the Geraldine Dodge Poetry Festival in New Jersey in the late 1990s. After Rich's reading in the big tent, I stood in line to get my only book of hers, An Atlas of the Difficult World, Poems 1988-1991, signed. She greeted every reader with a friendly smile, until she reached me. I got that stern-lipped cold stare you see to the left. It's as if she didn't approve of me at all. It's as if she knew I hadn't even read the book yet. I came away a little unsettled and my friends laughed about how pissy she looked signing my book. That incident never endeared me to her. 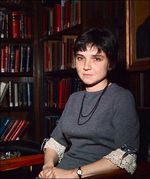 was the fact that I was a Riot Grrrl sort of feminist (that is to say third wave) and Rich was a second wave feminist. The 3rd wave girls have always butted heads with the 2nd wave women. Even our insistence on self-referring as girls irked those 2nd wavers.

Then there were those poems of hers we read in poetry class, the ones I could never quite get under my skin, like "Diving Into the Wreck." In a recent class we read "Blue Rock", "Edges," "Poetry: I," "Poetry: II, Chicago," "Poetry: III," and "To a Poet." I have nary a check mark near the title of any of them. Even their dry titles cause my nethers to feel a bit dehydrated.

It might at first seem extraordinary how Rich's "look" morphed over the years in these photographs. But those thin stern lips always identify her, even when she's smiling.

I have to say the divide between the 2nd and 3rd wavers has somewhat died down now. We're beginning to see our mothers and daughters without so much rebellion, resentment and misunderstanding.

And I realize deep down that Adrienne Rich's sourpuss face that day probably had more to do with a lifetime of frustration against those who disapproved of not only her sexuality but her literary campaigns on behalf of her sexuality, the trauma left by the gunshot suicide of her economist husband back in 1970, or the constant rheumatoid arthritis she suffered all her adult life, complications of which finally ended it.

And this week I finally found an Adrienne Rich poem I liked...in the Emily Dickinson book, The Mind of the Poet, I just picked up at the Highlands library. The poem is simple titled "E." in Gelpi's book but later Rich must have changed the title to "I Am in Danger—Sir—"

and in your halfcracked way you chose
silence for entertainment
chose to have it out at last
on your own premises.

ch speaks not only to Dickinson herself but to the way all feminists choose to have it out at last on their own premises.

Read the New York Times profile of Adrienne Rich ("a poet of towering reputation and towering rage") when she died:
http://www.nytimes.com/2012/03/29/books/adrienne-rich-feminist-poet-and-author-dies-at-82.html?pagewanted=all

Poetry headlines in the news

I was at the Highlands University Library this morning in Las Vegas, New Mexico, trying to track down a 1933 thesis written by J. W. Wilferth called "An Economic History of Harding County, New Mexico" for a story I'm researching. I had to sit down and read the thing in one sitting but it turned out to be what I would call an amazing document of mid-depression, pre-Dust Bowl community-denial about dry land farming.

But in any case, I was also looking for the novel The Hi Lo Country  by Max Evans, also written about the high plains of northeastern New Mexico. To get to that book, my husband inadvertently lured me through the library's section of literary criticism. Heaven help me. It pained me not to have time to look through all the old biographies and tomes of dusty literary thought.

I did sneak out these two books which look promising: 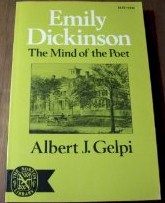 Check out the Daily Dickinson

A Book About Moses 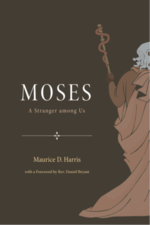 This interview talks at length about a modern and progressive interpretation of Moses, as well as some inspiring and informative discussion on when Maurice found time to write, publisher rejections and pre-writing marketing research.

Interview with Maurice D. Harris, author of Moses, A Stranger Among Us

Think Outside the Lament 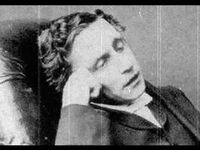 Sigh. Being a poet is hard, Lewis Carroll's pose seems to say. Reading poems on my iPhone hurts my eyes!

And most of all, thinking outside of your own rationalizations about who you are and what you do as a writer and poet.

For the inaugural poem of this site, Lewis Carroll's "A Square Poem" is apropos on all these levels. Especially if you consider that "she" might be your perfect reader.

I often wondered when I cursed,
Often feared where I would be—
Wondered where she'd yield her love,
When I yield, so will she.
I would her will be pitied!
Cursed be love! She pitied me ...

Lewis Carroll, in the public domain

The Poems on Mars Project: Tagging 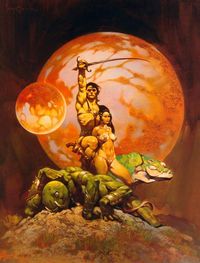 If this painting by Frank Frazzetta depicts our future life on Mars, should not the image have a book of poetry in there somewhere?

Indeed it should...but the only way we will ensure our libraries of poetry books will make it through the great planetary migration will be for us to ensure poetry is relevant today. We must make sure these books make it into the United Van Lines space trucks and not on top of the earthly Goodwill piles.

The first thing we must do it to make sure all of earth's books of poetry are search-able and findable to purchase on the Internet.

How do you do this?

If people can't find poetry, they won't buy poetry or read poetry. Tagging will help everyone find these oft-pass-over books! Tag a book or more a week!

Posted at 11:15 AM in Poems on Mars Project, Poetic Realities, Think Outside the Lament | Permalink | Comments (0)

Pay Attention to Your Feet / Get a Massage 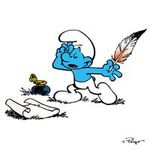 "Pay attention to the bottom of your feet." -- Zen Master

"In the zendo, one must pay attention to one's feet. Our feet are amazing. They contain endless nerve endings that can give us incredible information about the place we are in, about ourselves, our lives and our direction. Our feet assist greatly in coming to balance...Yet how many of us take the time to pay attention to our own balance and wisdom, to the bottom of our own feet." -- Brenda Shoshanna, Zen and the Art of Falling in Love

And this is one of the many reasons you, little blue poet Smurf, deserve a massage. Writing is hard on your little blue hands and arms, hard on your upper back and neck (because you slouch). The act of thinking takes you out of your body entirely. Who thinks about their feet when they're writing?

But here's the rub, most writers think massages are for people like John Forsythe and Joan Collins, that you have to find a spa to get one. Do poets even know how to search for spas?

I've been to spas. I've been to Asian parlors and reflexology clinics in strip malls. I've found my massages in hair salons, nail salons, and some sketchy low-rent, top-off parlors. And I've learned a lot about price and quality:

So go forth and find an affordable massage. And tip well; your masseuse is probably a broke Chinese poet.